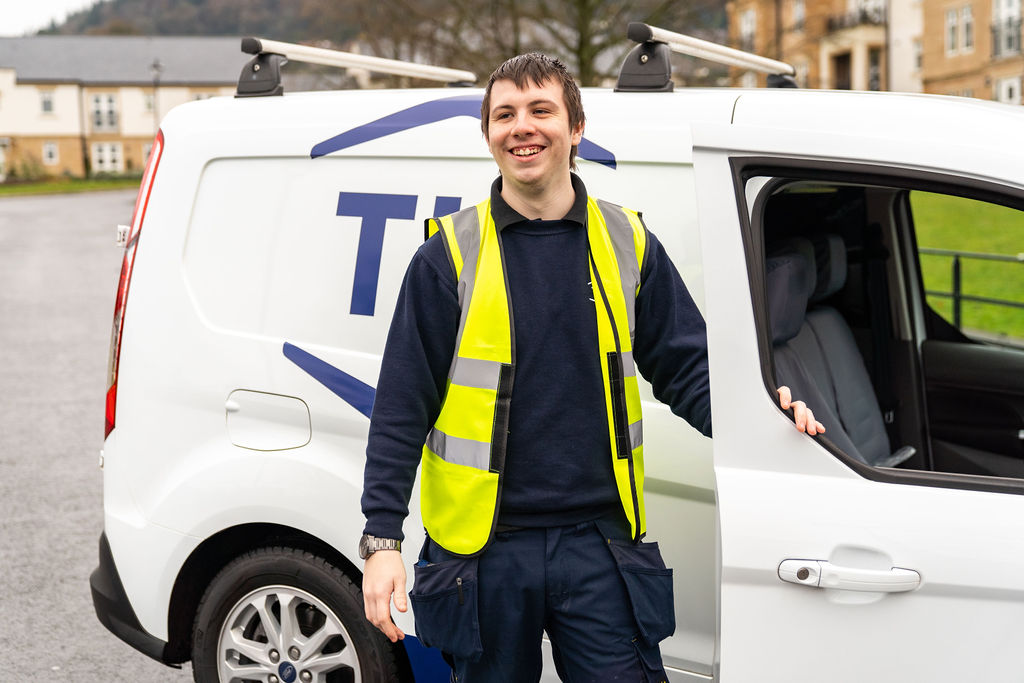 I’ve always been interested in computer systems and electronics so becoming an engineering apprentice was a natural step.

My interests led to me initially studying light and sound engineering at college with the intention of doing stage lighting in the entertainment industry one day. But after realising how inconsistent the work in this sector can be, I decided to explore other career paths that were more stable but still incorporated my love for electronics and computer systems.

This led me to the security sector where I first worked onsite installing CCTV cameras, giving me some initial exposure to field work. When I heard about the apprenticeship opportunities at TIS, I knew that my prior experience doing similar onsite work would lend itself well to the role. I applied, went through a smooth recruitment process and got the job. That was two and a half years ago now, and since then I’ve learnt so much about the life safety and security industry.

The course structure itself was designed according to the bespoke needs of TIS by apprenticeship provider Skills for Security and the experience thus far has been quite varied. We’re learning about an array of different security systems and technologies – everything from intruder alarms and access control to data security.

The course gets increasingly difficult with each year. We started with a very basic introduction to the sector at the start of year one, focusing on surveying and designing systems. Year two is all about the installation of these systems and the programming and commissioning involved in the planning stages of a project. This entails testing that the system is fully compliant with industry standards and codes of practice and then signing the system off as compliant. Year three is dedicated to making sure we leave as technical experts with the ability to understand the processes and procedures around system maintenance, fault finding and auditing.

But beyond the coursework itself, something that stood out to me from the very beginning of this whole experience, is the quality of the teachers at the Academy. They’re very hands-on and attuned to the different strengths, abilities and experience levels of their students. The course is handled in such a way that you’ll be able to do well regardless of how much exposure you’ve had to fire and security systems. We’re also shadowing some of the best people in the company, from fellow engineers to project managers, so whatever wasn’t clear in the classroom will be clarified during the fieldwork itself.

While the pandemic pushed graduation back slightly, I’ll be done with the apprenticeship soon and intend to use the skills acquired to work as a project manager for TIS. A role I feel quite confident taking on because of all the hands-on exposure and shadowing we’ve done with TIS project managers already.

We are an ARCO Event Partner!

We are delighted to announce we are an Event Partner for the ARCO Annual Conference at the IET, London this July.

Sentinel home hub devices to be installed across all existing and new Audley developments, enabling residents to live independently for longer